It’s time for another Season Sim! In this feature, I set BracketBot’s predictive mechanisms on full speed and have it play out the entire remainder of the 2020 season from today forward. I offer no guarantees, but this is one way that the rest of the season could play out. Let’s get right into it! Gaze into my crystal ball; the date is now April 6, and we’ve all just watched…

…we’ve all just watched Oregon handily defeat Duke, 79-65, to win their first national championship since the inaugural NCAA Tournament in 1939! The Ducks and Blue Devils were both #3 seeds, and the other Final Four combatants were #2 seed San Diego State and surprise #1 seed Maryland! Here’s how the bracket appeared:

(all won-lost records are through the start of the NCAA tournament, and rankings are as they would be in the BracketBot ranking at that time) 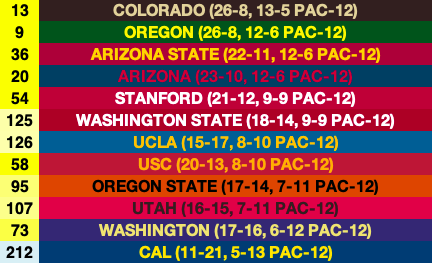 The Pac-12 breaks their championship drought before the Big Ten does, winning the conference’s first title since 1997. As I write this, the Ducks are on a bit of a cold spell, and they’d pick up two more losses in their next three games, Colorado in Eugene and Arizona State on the road, but those would be their final two losses of the season. Colorado had the conference regular-season title wrapped up with two games to go, and proceeded to lose those two games to Stanford and Utah, finishing 13-5. The Pac-12’s reputation is definitely boosted by the fact that all four teams win their first-round games, including ASU over Marquette in an 8/9 matchup. Oregon and Arizona meet in the Sweet 16 after the Wildcats’ second-round upset of Kansas, but of course the Ducks go ahead to glory. 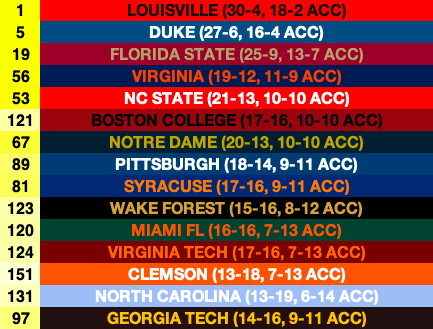 Save for Louisville, the whole ACC kinda slips back in this simulation. Duke drops two of their final four home games, to, of all teams, Notre Dame and North Carolina, and lose handily to FSU in the ACC tournament, so they’re not seen among the crop of favorites necessarily going into March. Louisville is, though; despite a shocking blowout loss at Georgia Tech, the Cards win out after that through the conference tournament. The Noles have the biggest backslide, though, losing 4 of their 7 remaining games, getting blown to smithereens in the ACC final, and settling for a 6 seed in the same pod as the eventual champs, Oregon. All three of the tourney teams, actually, meet their end at the hands of the Ducks. NC State makes a run to the NIT semifinals. 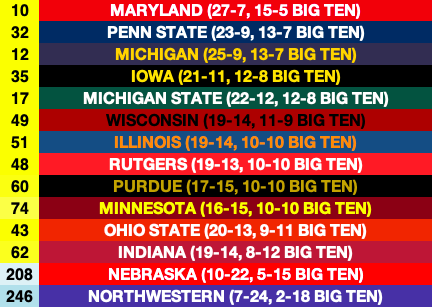 A couple of interesting things happen in the Big Ten. Illinois absolutely implodes, losing 8 of their final 10 conference games, including consecutive defeats to Nebraska and Northwestern, and misses the tournament entirely. By virtue of winning the conference by a full two games, the Terps are highly-regarded enough by Selection Sunday that they are rewarded with the fourth and final #1 seed. Penn State is a pleasant surprise over the season’s final few weeks, picking up solid road wins like Indiana and Iowa to finish 2nd, though they would eventually be upset by St. Mary’s in a 6/11 game. Four B1G teams eventually make the Sweet Sixteen, though 3 of them are in the same location, in New York, and Maryland comes out of that region as the only #1 seed to make the Final Four. Minnesota makes a run to the NIT semifinals. 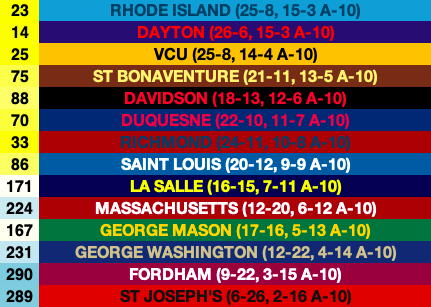 Dayton has a surprisingly tough finish to the season, losing to VCU, Davidson and URI in the regular season, missing out on the top seed, and then losing to Richmond in their first A-10 tourney game. It’s a memorable run for the Spiders, who probably steal an NCAA tournament bid in the process despite eventually getting a 10 seed. The conference’s top 3 teams are all seeded on the 5 or 6 lines, and are probably popular upset picks in the tournament, but all survive the first round. Rhode Island goes the furthest, taking advantage of the 1 seed in their bracket being upset to go on to the Elite Eight before falling to Duke. 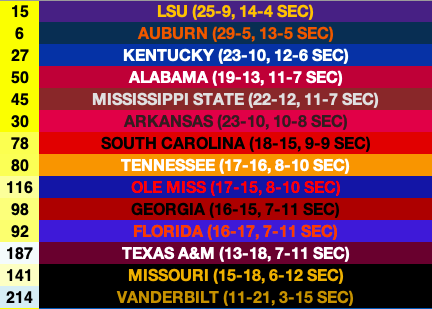 LSU finishes with the best conference record, but it’s Auburn who is the most highly-regarded going into March, with their undefeated non-conference slate and their win over LSU in the conference tournament. These Tigers get a #2 and a #4 seed, and they’re the conference’s two reps in the Sweet Sixteen. Kentucky, meanwhile, has a difficult end to their season, picking up losses to the two teams ahead of them, but also bad ones against Vanderbilt and Ole Miss, and is relegated to an 8/9 matchup, which they win before losing against Maryland. 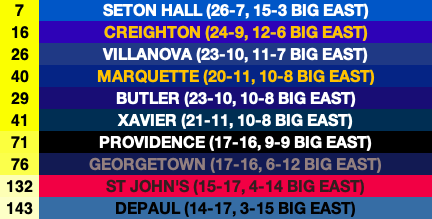 Seton Hall’s current 3-game advantage in the conference standings carries through, and they win the league handily. They’re afforded a lot of luxuries because of that; a 2 seed and favorable locations in Albany and in the New York region, but it all goes up in smoke in the second round vs. #7 Ohio State. It’s a pretty disastrous tournament for the conference, which has a couple of first-round upsets (Villanova/Belmont, Butler/Arkansas) and doesn’t get a team into the Sweet Sixteen. 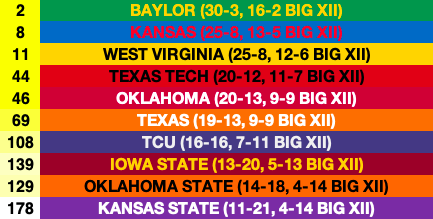 Unlike last week’s Sim, which was pretty disastrous for the Big XII, this one goes alright – up through the tournament, at least. The losses are more spread out how you’d expect and the conference gets half its teams into the field, with Oklahoma going to Dayton and beating Purdue in the First Four. Baylor is the #1 overall seed thanks to 3 wins over Kansas, and the Jayhawks still get a #2. Tournament time, though, is pretty awful. Baylor, Kansas and WVU are all upset in the second round by significantly lower seeds (ETSU, Arizona and St. Mary’s, respectively) and the conference is shut out of the Sweet Sixteen. 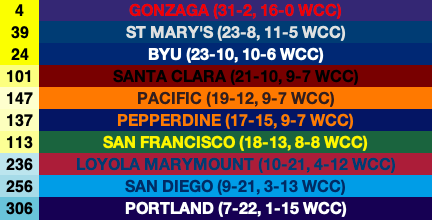 The WCC goes pretty much as expected, save for a speed bump in the conference tournament final for the Zags. Gonzaga still gets a #1 seed, and gets to play basically at home in Spokane, but when they get to LA for a Sweet Sixteen matchup with Cinderella Furman it all goes awry. The Gaels get just as far as Gonzaga does in the tournament as a Cinderella themselves, upsetting both Penn State and West Virginia to head to New York as the 11 seed. BYU wins their 8/9 matchup with Cincinnati and puts up a second round fight but Louisville is able to hold them off. 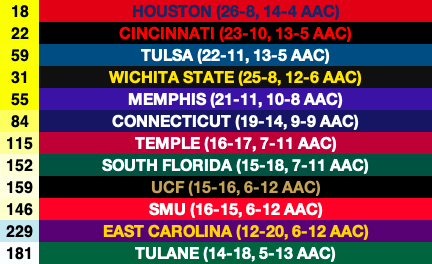 Not too much interesting to say about this version of the AAC, as everything kinda winds up the way it is now, though it’s disappointing to see Memphis struggle their way out of a tournament bid. Houston is Furman’s first-round upset victim, and the conference as a whole only wins 1 game in the NCAA tournament, WSU’s first-round win in a 7/10 matchup with Wisconsin. Where the American shines is in the NIT, where its two representatives go on long runs and meet in the championship game. Tulsa’s a 6 seed and doesn’t play a single game at home during the tournament, but they win it anyway, defeating Memphis by a point in the final, 66-65.

That’ll be all for this Season Sim! I’m hoping to have another of these written up on Friday, so we can see another version of how this 2019-20 season could finish up. Thanks for reading, everybody!