Welcome to another Season Sim! In this series I turn my BracketBot ranking and prediction model on itself, have it play out the rest of the 2019-20 season and we’ll take a look at what happens! This is, of course, not a guarantee of any kind, but it’s a fun look into what we might be seeing and thinking come April 6. So without further ado, take a look into my crystal ball! It’s now Monday, April 6, and we have all just watched…

…we’ve all just watched Louisville defeat Kansas, 71-60, to win the program’s third* national title! Louisville was a #3 seed going into a Final Four that had the other 3 #1 seeds in it, and matched the record of defeating 3 number 1 seeds in a single tournament – Michigan State in the Elite Eight, Duke in the national semi and Kansas to win the title. Here’s the full bracket:

There’s a lot to unpack here. A miracle run by Providence to even make the tournament, then a Sweet 16 berth; Wichita State barely getting in via the First Four, then going to the Elite Eight, and more first-round upsets from some familiar giant-killers like Stephen F Austin and New Mexico State. Let’s go through one conference at a time, unraveling what’s happened in the intervening two months, and starting with the home of our new champs, the ACC!

(All records are as of the start of the NCAA tournament – rankings are as they would appear in my power rankings as of the same time.) 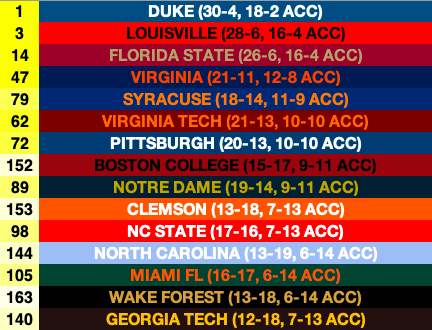 The ACC has been searching all year for a fourth team to join their big three in the tournament, and no one ever really steps up. NC State falls apart, losing ten of their last 12 conference games. Virginia is held to 28 points in a loss at Louisville, and were blown out by Duke in the tournament semifinal, so they never really get the marquee win that they needed, but they do win the NIT, coincidentally winning all five games by between 6-8 points. Duke is #1 for a good portion of late February/early March, but does not get the tournament’s #1 overall seed with the loss to Louisville in the tournament final. Of course, as you saw earlier, they’d also lose the rematch in April. 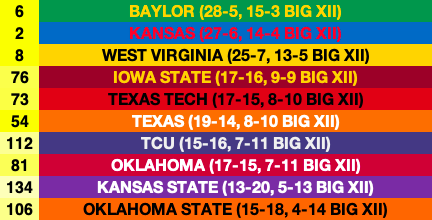 Another difficult Selection Sunday outcome here – the Big XII has three teams that are absolute locks, and the rest are teams that could be fringy & bubbly, but in this scenario they’ve all missed out. Texas comes closest, with a not-bad 19-14 record and an upset win over WVU in the conference tournament, but just too many losses overall. The Horns make the NIT semifinals. Kansas and Baylor both are #1 seeds, on the left side of the bracket. Kansas’ first two games are blowouts, but Arizona and the Dayton rematch are won by a combined 3 points. Baylor, meanwhile, has a fairly tough time with all their tournament games, including in the first round against St. Peter’s, but they do survive into the Final Four before Kansas beats them again, 70-58. WVU is upset by Houston in the second round of the tournament, a 2-7 matchup.

The Big Ten is trying to be the first conference to get twelve teams into the NCAA tournament, but it turns out to be ten – Minnesota and Michigan are left behind. Iowa, after a season-ending slump, is the very last team in the field – a win over Rutgers in the 7-10 matchup would’ve done it, but they’re left sweating on Selection Sunday and get sent to Dayton, where they do beat St. Mary’s but then get blitzed by Marquette in St. Louis. Ohio State, meanwhile, has a huge turnaround, and by the time March comes around their January is seen mostly as a blip. Overall, it’s probably seen as a disappointing tournament for the B1G, only two teams making the Sweet 16 (Michigan State and Purdue). 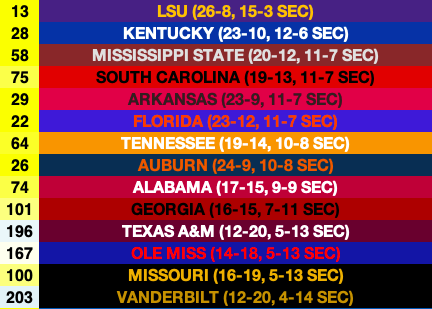 LSU has already built themselves a 2-game cushion as we sit here in early February, but that grows to 3 games by season’s end – we’re left wondering where this team was in the first half of the season! Their undefeated run is shockingly broken at Vanderbilt (IRL, that game is tomorrow), and they also lose to Auburn and Alabama in quick succession before reeling off six more wins to end the season. Speaking of Auburn, they go just 4-6 in their last 10, finish in the bottom half of the SEC, and get revenge swiftly handed to them by LSU in the 1-8 quarterfinal, but a 24-9 record and what they accomplished in the early part of the season is enough to get the Tigers in as an 8 seed. The SEC has a decent time of it in the tournament – only Auburn loses in the first round, and only Kentucky loses in the second round. LSU and Arkansas meet in the Sweet 16, up in New York, which is a 10-point win for the Tigers. Tennessee gets to the semifinals of the NIT. 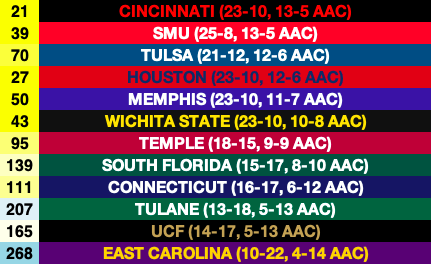 SMU has shown a lot of improvement as the season has gone on, and that run continues here, taking them all the way to 2nd place in the conference. Unfortunately, it’s still not quite enough to get them into the dance, with an 18-point loss on Selection Sunday probably being the thing that keeps them out – they’re the top overall seed in the NIT instead. What a tournament run for one of the teams keeping them out, though, in the Shox. Sent to Dayton after an early exit in the AAC tournament, Wichita State crushes Xavier in Dayton even with X having quasi-home court, then travels to Albany where they easily handle #6 Stanford and beat #3 Ohio State as well. They then take down the mighty Gonzaga in the S16 before finally falling to Baylor, one step short of matching 2011 VCU’s run to the Final Four. 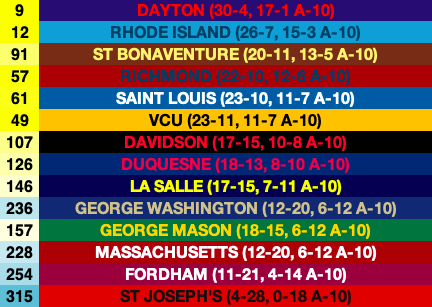 Rhode Island, for my money, is one of the teams that’s been most overlooked throughout the middle part of this season, but they put the world on notice by running through the A-10 tourney and beating Dayton. URI then gets a #6 seed, and… blows it instantly, getting edged by a plucky DePaul in the first round. Dayton, meanwhile, would’ve had an outside shot at a 1 seed if they’d won that last game, but instead go in as a #2 in the Midwest regional, having gone undefeated against A-10 teams other than URI. The Flyers get all the way to the regional final and a rematch with Kansas, who beat them in the Maui final in the fall – but Kansas comes up with the win again. 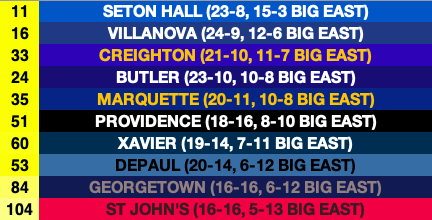 The picture-perfect recipe for the Big East. If you’ve been wondering where those extra tourney bids were that weren’t in the ACC and Big XII, here they are. Xavier gets in thanks to a late-season upset of Butler and a narrow loss to Villanova in the BE tourney. DePaul makes a run all the way to the conference final, taking out Seton Hall and Butler on their half of the bracket, and get one of the last non-First Four spots. And Providence, with no chance of getting in otherwise, goes on a miracle run through the league tourney, beating Creighton, Nova and DePaul to get through to March. Not finished yet, either, as Creighton edges out #4 seed Oregon before blowing past #5 seed Maryland to get to the Sweet Sixteen, where they’re promptly picked apart by Duke. Overall, this has got to be the best-case scenario for the Big East. 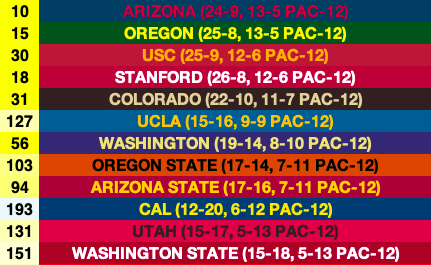 The Pac-12 has been cannibalizing itself a bit this year, and that continues for the rest of the season. All 12 teams finish with at least 5 wins and 5 losses in conference. The team that gets the biggest bump out of this outcome is probably Washington, who win 8 of their last 10 regular season games. It’s too late for them to make the tournament without a miracle run in Vegas, but they get to the final of the NIT. Colorado suffers an embarrassing conference tournament loss to Washington State, but still get a 9 seed. The entire conference wins only two games in the tournament, both of those from Arizona, and a few of the losses being upsets (Providence over Oregon, Wichita State over Stanford) so we go into 2020-21 hearing about the Pac-12 being a disappointment yet again. 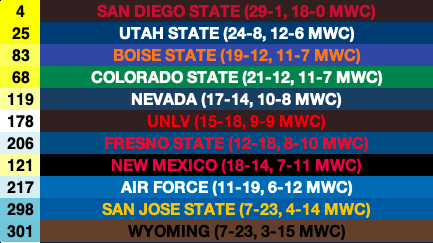 You can basically deduce what’s happened here – SDSU runs the table in the regular season, and enters the Mountain West tournament 28-0. Their quarterfinal is an easy win over New Mexico, but they just don’t have it in the semis and take a big upset from Colorado State. It definitely costs SDSU a 1 seed. Instead, they enter as a 2, destroy Colgate in the first round but take a tough loss to Arkansas in the second round. Utah State probably would’ve gotten into the tournament either way, but they take the autobid and lose to Penn State in an 8-9 matchup. 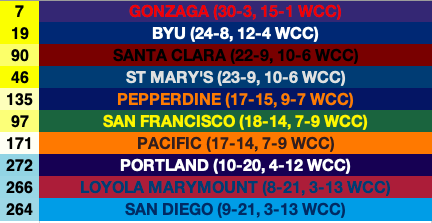 Speaking of costing yourself a #1 seed, that’s what Gonzaga’s done as well in conference tournament weekend. Their one loss in conference play was to Pepperdine by double digits, a tough one if you want to be considered one of the country’s 4 best teams, so there was no room for error. The Zags do still get a couple of basically home games in Spokane to start the tournament, and then go to the West Regional in LA, so it’s not so bad, but what is bad is getting upset by an 11 seed in that Sweet Sixteen round, which is their ultimate fate. BYU is also playing in Spokane, pretty highly regarded at 24-8, though they lose to Arizona in the second round. The Gaels also make it as one of the final teams into the field, but their season ends in Dayton at the First Four.

That’s all for this Season Sim! I’m gonna get into a rhythm of doing these twice a week for the month of February, at least – once it becomes March the possible outcomes are lessened, so the surprise factor maybe isn’t there. Anyway, hope you enjoyed this look into the future – I’ll be back with a bracket update a little later in the week!