Can you believe it’s already time for conference tournaments to get underway? The first set of games is Monday, March 4! Though plenty of conferences still need to finish their regular seasons, (mostly smaller) leagues start play this week, and the first automatic bid will be handed out on Saturday! In this first preview edition, I’ll cover eight conferences who are starting play this week. Included for each are the conference standings/seedings, including their current BracketBot rankings as of today, and a chart detailing how likely each team is to advance to any particular round.

Only the top 8 qualify, so Stetson will be left out. North Alabama is in their first season of D-I play, so they’re ineligible for the NCAA tournament, but winning this tournament is a fairly remote possibility anyway – it would be pretty surprising if neither of the top two teams won this tournament. Both will get a pretty substantial edge from home-court advantage, and Lipscomb will get the biggest boost by being able to play the entire tournament at home in Nashville. 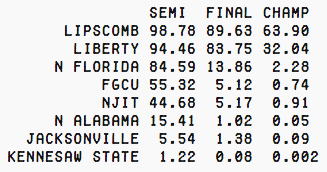 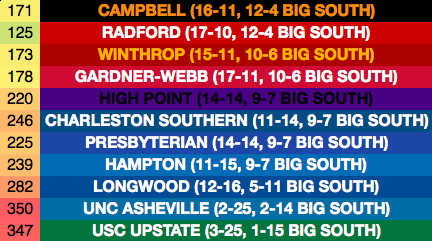 Campbell and Chris Clemons will benefit from getting to play the entire tournament at home, but Radford rates as the top team in this conference and is still the most likely to win it. This is a fairly open tournament, so look out for a couple of wild cards like Gardner-Webb and Charleston Southern. 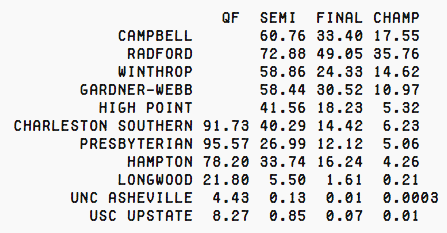 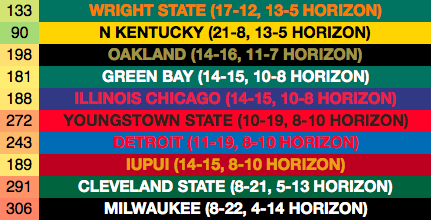 Only the top 8 teams qualify for this tournament, so Cleveland State and Milwaukee are sitting at home. Wright State gets the top seed by virtue of their sweep of Oakland serving as the tiebreaker, but NKU is the top team and will be favorites in this tournament. For being the lowest-seeded team in this bracket, IUPUI’s chances are surprisingly good. If they can pick up a road win against the #1 seeded Raiders, IUPUI’s chances are about as good as anyone’s after that. 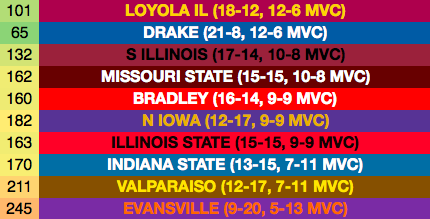 Despite Drake ranking quite a bit higher in the BracketBot rankings than Loyola, that discrepancy is due to their superior résumé, and looking forward BracketBot ranks them almost identically! (Drake 118th, Loyola 119th) The two of them are pretty equal co-favorites to win this tournament, with more than a 50% chance that one of them wins it, and about a 1-in-4 chance that they play against each other in the final. 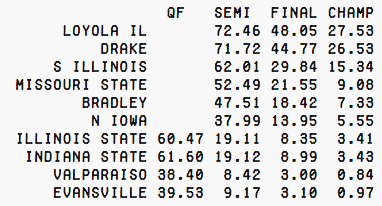 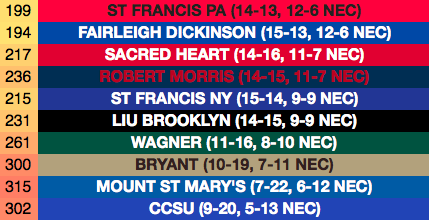 Because of the gap between days in this tournament, the NEC has adopted a format
that sees winners get re-seeded after the first round. It’s great for competitive balance, and should help make sure that the league’s best teams make it to at least the final. But it’s hell for people who have programmed systems to automatically predict the winners of these tournaments, if that’s something you care about. St. Francis University gets a big boost from getting to play the whole tournament at home, though I wouldn’t be too surprised to see any of the top four teams take it home. 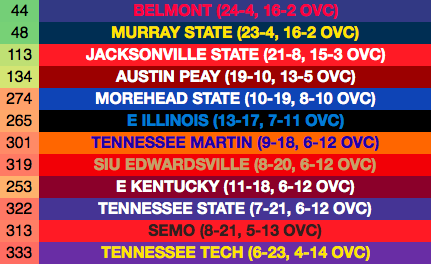 Of course, conferences who want to assure their best teams get the best shot at winning the conference tournament could always go back to this strategy, which only the OVC, Southland Conference and WCC are still using. Belmont and Murray State, the two best teams in the conference by a mile, both this year and historically, will be placed in the semifinals automatically, and only eight teams have even been invited to take part. As a result, Belmont or Murray State would win this tournament about 84% of the time, and the odds of one of the four teams playing on Wednesday winning the tournament are about 500-1. 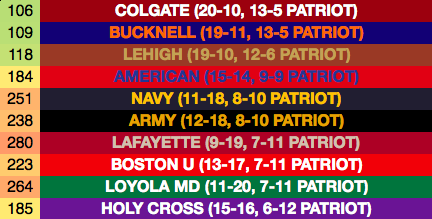 When your conference tournament is held on campus sites, the tiebreakers become immensely important. Colgate, Bucknell and Lehigh are all teams of about similar strength, and even though Colgate and Bucknell tied for the top spot, the fact that these teams all split their season series means that Colgate gets home-court advantage throughout because they rather arbitrarily beat #4 seed American twice while Bucknell split with them. One of these years, I’d love to see point differential used as a tiebreaker for teams who have split their season series, but I don’t know if the NCAA wants to encourage running up the score or what have you. Colgate also benefits from the fact that Bucknell and Lehigh are on the other side of the bracket, so they wouldn’t have to beat both. 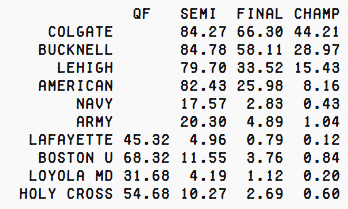 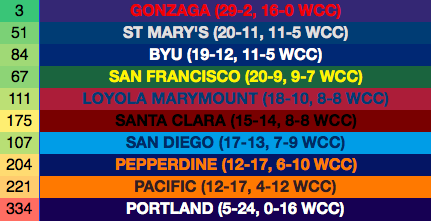 As if Gonzaga needed any help to win this tournament, the WCC has given them an automatic bye to the semifinals via the ladder format. They’d probably have an 80%+ chance to win this tournament no matter how it was set up, so the biggest beneficiary of the format change is probably #2 seed St Mary’s, who only need to win once to make it to the final game. The Gaels are in position for a possible at-large bid, so only having one opportunity to mess things up pre-Gonzaga is a big boost too. If you’re hoping for a lengthy run from somebody here, the best candidate by far to make a five-wins-in-six-days run is San Diego.

That’s it for part I – I’ll be back on Wednesday with previews for eight more conference tournaments!